The Story of Bookmarks

What are you using as a bookmark? A simple ribbon or piece of string? An old concert ticket? A wrinkled paper with someones phone number? I remember my father used to put in the book just a small, ripped off piece of newspapers. Well, I hope you are more creative person, who, like I do, think that is much more in this small object called the bookmark. And there is a quite a history of it….

The history of bookmarks is intimately connected with the development of the book itself. Though the earliest bookmarks date from the medieval ages, it is obvious that even in ancient times – when papyrus scrolls were the reading matter of choice – bookmarks must have been used to mark a reader’s place on the scrolls that could be 40 meters or more in length. Some of the oldest bookmarks were found in medieval monasteries and among them are clip-on type bookmarks made of vellum. Therefore it is easy to imagine that this type was also used to mark place on the papyrus scrolls in ancient Egypt. Bookmarks were used throughout the medieval period, consisting usually of a small parchment strip attached to the edge of folio (or a piece of cord attached to headband). As the first printed books were quite rare and valuable, it was determined early on that something was needed to mark one’s place in a book without causing its pages any harm. With the rise of printing in the fifteenth century, books were published in limited numbers and were quite valuable. The need to protect these precious commodities was evident. One of the earliest references to the use of bookmarks was in 1584 when the Queen’s Printer, Christopher Barker, presented Queen Elizabeth I with a fringed silk bookmark. 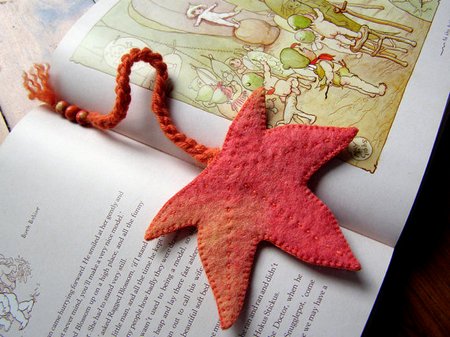 Common bookmarks in the eighteenth and nineteenth centuries were narrow silk ribbons bound into the book at the top of the spine and extended below the lower edge of the page. The first detachable bookmarks began appearing in the 1850’s and were made from silk or embroidered fabrics. Not until the 1880’s, did paper and other materials become more common. 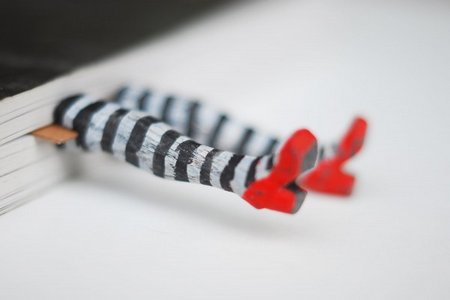 The great period of bookmark design and the use of luxuriant materials was during the Victorian and Edwardian eras. The idea that a bookmark be used to keep one’s place and protect one’s book caught on, and bookmarks have been produced in a variety of materials ever since. Modern bookmarks are available in a huge variety of materials in a multitude of designs and styles. Many are made of cardboard or heavy paper, but they are also constructed of leather, ribbon, fabric, felt, steel, wire, tin, beads, wood, plastic, vinyl, silver, gold, and other precious metals, some decorated with gemstones. The first detached, and therefore collectible, bookmarks began to appear in the 1850s. One of the first references to these is found in Mary Russell Mitford‘s Recollections of a Literary Life (1852): “I had no marker and the richly bound volume closed as if instinctively.” Note the abbreviation of ‘bookmarker’ to ‘marker’. The modern abbreviation is usually ‘bookmark’. Historical bookmarks can be very valuable, and are sometimes collected along with other paper ephemera. By the 1860s, attractive machine-woven markers were being manufactured, mainly in Coventry, UK, the centre of the silk-ribbon industry. One of the earliest was produced by J.&J. Cash to mark the death of the Prince Consort in 1861. Thomas Stevens of Coventry soon became pre-eminent in the field and claimed to have nine hundred different designs. Woven pictorial bookmarks produced by Thomas Stevens, a 19th century English silk weaver, starting around 1862, are called Stevengraphs. Woven silk bookmarks were very appreciated gifts in Victorian days and Stevens seemed to make one for every occasion and celebration. One Stevengraph read: All of the gifts which heaven bestows, there is one above all measure, and that’s a friend midst all our woes, a friend is a found treasure to thee I give that sacred name, for thou art such to me, and ever proudly will I claim to be a friend to thee. Most nineteenth-century bookmarks were intended for use in bibles and prayer books and were made of ribbon, woven silk or leather. By the 1880s the production of woven silk markers was declining and printed markers made of stiff paper or cardboard began to appear in significant numbers. This development paralleled the wider availability of books themselves, and the range of available bookmarkers soon expanded dramatically. One Response to The Story of Bookmarks