Pinup Girls: A Short History of

Although beautiful women had been portrayed in print for years by the likes of Armstrong, Christy and Gibson…it wasn’t until Esquire magazine began publishing George Petty’s humorous one panel cartoons of out of this world girls being ogled, and propositioned by unlikely suitors, that the die was struck, and America’s fascination with pinup took off like a rocket.

When or where did it all begin? The “art” of seduction. Pinup, glamour, and cheesecake as we generally think of it today began to gain popularity in the 1930’s. It was a time when the image of a pretty girl flourished. Whether it was a painted calendar; advertisement; or the photo pinups of Rita, Betty or Esther that the G.I.’s adorned their footlockers with. Pinup was a uniquely American art form.

Classically trained illustrators like Petty, Rolf Armstrong, and Gil Elvgren began creating some of the most memorable, technically exquisite “Americana” ever produced! Calendars; magazine covers; mutoscopes; and matchbooks became a personal view into the private lives of the girl next door. Pinup art continued to grow in popularity, and sophistication through the 1950’s. There were magazine articles featuring the country’s favorite artists, who through their depictions of these enticing beauties, had become household names. Pinups were everywhere! 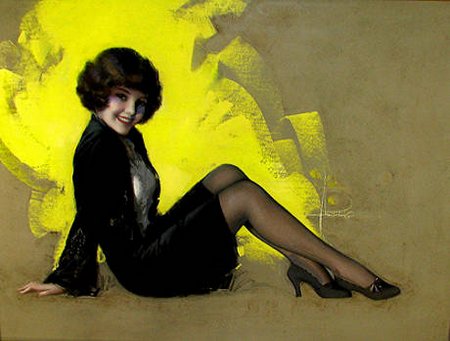 During WWII, in some cases they were a soldiers only link to their world back home. Movies were made about Pinup Artists and models…and most actresses of the time were considered pinups first then actresses. Marilyn Monroe was Earl Morans’ favorite model before and after she became a movie star! Numerous celebrities throughout the last 75 years have posed for pinup and glamour artists. However, by 1960 the classic “painted” pinup was all but dead. Either the public was asking for more, or publishers became aware of what they could produce and sell. Pinup Art became inappropriately lost within the sea of the sex industry. Paintings of attractive seductive women became increasingly more realistic, and explicit. Apparently in an attempt to compete with the photographs that were more an expression of the publics’ fascination with nudity, than creativity or beauty. 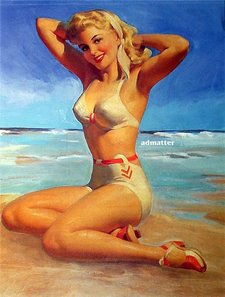 Unfortunately, the vast majority of pinup art being produced today is not supported by years of study and hard work. The great pinup and glamour artist, Bradshaw Crandell, once said that he “deplored unskilled painting over innacurate drawing.” Worse yet is the “pinup artist” that feels an Artograph, projector, or a traced photograph is the key to a good painting. Who’s to say that this is wrong? It is however, a sure sign of the lazy and unskilled student of art. There are a few, a small handful, that feel the measure of an artist is to be able to actually draw and paint. When it comes to pinup art, this is truly the challenge to all who follow. We have come full circle. Pinup art has been re-discovered, and introduced to new generations of people around the world. Books and related images are being published about the great artists of the past. Original paintings are highly sought after, and commanding sale prices that reach into the ten of thousands of dollars!

This wonderful American art form hasn’t received this much attention, or enjoyed as much popularity since it’s heyday from the 30’s to the 50’s. Everything old is new again.