Formerly a house painter, bounty hunter, and au pair, Candace Hicks has spent most of her life in her home state of Texas (except three years in Paris, France, not Paris, Texas. She has never been to Paris, Texas, but she grew up in a small town named for another cultural seat: Athens, Texas!).

She established a non-profit center for the arts in Athens, The Image Warehouse, in 2003. Trained as a print maker, she works primarily with books, but dabbles in video and installation. 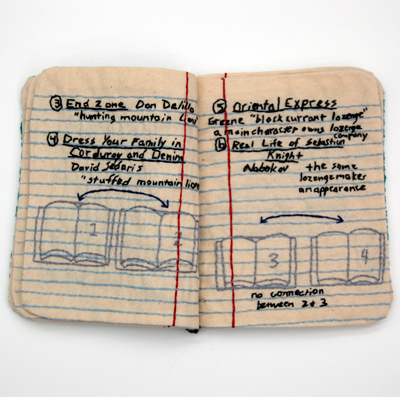 Candace says, „I’ve collected coincidences for ten years. It started when I read two books in a row that both included the phrase “antique dental instrument.” While that was not the first coincidence I ever noticed in my reading, that singular instance convinced me to keep a record. I began to consider that the phrase might have been the profound masquerading as the mundane. Or not. But I wanted to collect the data. I cataloged my coincidences in composition books that filled rapidly. As it turned out, “antique dental instrument” has not held any special meaning in my life or my art. Neither have any of the coincidental phrases that followed, such as “stuffed mountain lion” or “black currant lozenge,” but the act of noticing them became the lens through which I filter the world and my experiences.“ As an ardent reader, she naturally gravitate toward creating books and printing. And taking note of coincidences is akin to the kind of observation a landscape or portrait artist practices. Thus, her observations take the form of hand-stitched texts that she calls Common Threads. Sewing every line, letter, and illustration in the books enhances their status as objects. By laboring over a dime store composition book, painstakingly recreating it by hand, Candice have found a way to express the insignificant as potentially philosophical. The books themselves, self consciously hand made objects, are a record of coincidental occurrences generally gleaned from reading or mundane events. The use of embroidery thread allows for the production of the text and image with the same mark and material, to make the text, image and substance of the book inseparable.

Storytelling is key to Candace Hicks’ artistic practice. There is an implied narrative in everything, even, as Hicks addresses with her work, in the seemingly pointless mental wheel spinning that is a part of daily life. Her work acknowledges the unavoidable of simulation and the impossibility of originality. Her choice of the book as a principle medium is due to the phenomenon of the book as authoritative. Books provide an arena in which fiction can be accepted as fact and observations can take on a mythic narrative quality. Her interest in books also stems from their inherent unity of text and image, which lends books continued relevance as a trans-media hybrid.