Tim Burton (born August 25, 1958) is an American film director, film producer, writer and artist. He is famous for dark, quirky-themed movies such as Beetlejuice, Edward Scissorhands, The Nightmare Before Christmas, Ed Wood, Sleepy Hollow, Corpse Bride and Sweeney Todd: The Demon Barber of Fleet Street, and for blockbusters such as Pee-wee’s Big Adventure, Batman, Batman Returns, Planet of the Apes, Charlie and the Chocolate Factory and Alice in Wonderland. Since he graduated from CalArts in 1979, he was create a short films which we will present here. He worked as an animator, storyboard artist and concept artist in numerous short films.

Tim Burton directed a number of short movies early in his career. However, aside from his two most famous works for Disney and the TV episodes he directed, they have been mostly unseen, both by the general public and his fans. For that reason it’s hard to get a complete picture of Burton’s early career, aside from the second-hand reports available in various biographies of the director. His earliest known film is The Island of Doctor Agor which was made in 1971, when Burton was just thirteen years old. It was an animated film shot on Super 8 with a group of his friends. Around the same time, the budding filmmaker also made a short film called Houdini, with himself playing the famous escape artist.

Years later, after being awarded a scholarship to the famous Cal Arts institute, Burton continued to experiment with his love of animation, without producing anything of note. However, after he lost his scholarship, the desperate filmmaker decided to make his first “proper” film, a pencil drawn cartoon called Stalk of the Celery Monster (1979). The film caused such a stir among his class, which included future Pixar director John Lasseter, that it attracted the attention of Disney, who offered the young Burton a job. Despite this stroke of luck, Burton never really fit in at Disney, especially as it existed in the eighties. While working fruitlessly as an animator on The Fox and the Hound and The Black Cauldron, Burton spent his spare time indulging his real passion by directing cheapo films such as Doctor of Doom (1980) and coming up with ideas for his own personal projects, including what would later become The Nightmare Before Christmas. The biggest amateur production Burton directed during this time was the infamously bizarre film, Luau. The plot for this virtually impossible to find film is described in depth in the book Tim Burton by Jim Smith and J Clive Matthews. Suffice it to say, it involves surfing, disembodied alien heads and other wackiness. Clips from the film are available on the A&E biography of Burton, Trick or Treat, but they only offer tantalising hints for those of us who have not seen the film.

Vincent (1982) was Burton’s first film that actually saw a release, albeit a limited one. A stop-motion animated movie shot in beautiful black and white, it was based on a poem Burton had written himself. The short film tells the sad tale of Vincent Malloy, a suburbanite boy who wants to be just like his idol, Vincent Price. It was a deeply personal film for the young Burton, and it marked his first teaming with two collaborators who would have a great impact on his oeuvre. Rick Heinrichs, who would go on to design several of Burton’s later films, was the producer and provided additional designs. More importantly, the narration was provided by Vincent Price. Price had been Burton’s idol since childhood, and having him contribute his memorable voice to the film was an undoubted thrill for the young director. The classic horror star’s role also reinforced the theme of the film, which is that fantasies about monsters and mad scientists can become more important to kids than their own mundane lives. As Burton later said, “It was probably one of the most shaping experiences of my life.” Vincent was released on a small number screens by Disney, who were unsure how to market the morbid little film. Though few people saw it at the time, it played well at festivals and ultimately acted as Burton’s calling card in Hollywood.
Burton’s next project for Disney was a Japanese-themed version of Hansel and Gretel (1982). Filmed with a cast of amateurs, it was most notable for the inclusion of kung fu fights and a multitude of Japanese toys, both subjects Burton was obsessed with at the time. It premiered once on the Disney channel and to this date has never been seen again. 1984 saw Burton’s next film for Disney, Frankenweenie. It was his first major live action directorial effort, an affectionate black and white homage to Frankenstein and other monster movies. Burton came up with the story, which tells the tale of a young Victor Frankenstein living in a typical suburb. When his beloved dog Sparky is run over by a car, Victor brings him back to life with science. However, in time-honoured monster movie tradition, he is misperceived as a threat to the community. But it all ends happily when the suburbanites realise Sparky is a good dead dog, and help return him to life a second time.

Frankenweenie expanded on many of the classic Burton themes that first surfaced in Vincent. It could almost be seen as a test run for Edward Scissorhands, even though that later film about a misunderstood “monster” had a far more bittersweet ending. It was also the first time Burton had worked with a professional cast, and the fine performances were an early indication that Burton could be an actor’s director as well as a visionary. 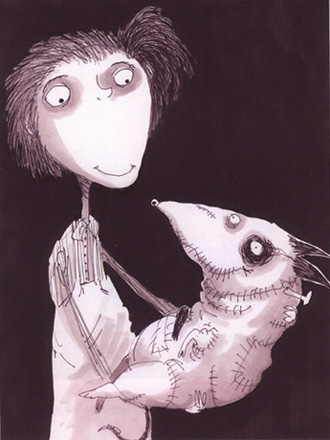 Unfortunately, the film never saw a release at the time. Disney had planned to screen it before a re-release of Pinocchio, but that plan was cancelled when Frankenweenie was given a PG rating, making it “unsuitable” for younger kids. Aside from the occasional screening, Frankenweenie was shelved for almost ten years. Despite this, praise for the film from people in the industry who had seen it, including Stephen King, would eventually lead to Burton being offered his first feature film work. From the Tim Burton’s exhibition in MOMA in 2010

That same year, Shelly Duvall (who had starred in Frankenweenie) asked Burton to direct an episode of her Faerie Tale Theatre series. Burton was chosen to helm Aladdin and his Wonderful Lamp. The episode, which is now available on DVD, had some big names in the cast, including Leonard Nimoy and James Earl Jones. Despite the low-budget nature of the series (it was shot on video and the production values left something to be desired) Burton did a respectable job in what was essentially his first “director for hire” role. However, it was not a completely satisfying experience for the director, and he vowed in future to only direct projects he had a personal connection to. His next project was, of course, Pee-Wee’s Big Adventure. Burton’s final directing job for TV was an episode of the new Alfred Hitchcock Presents series. The Jar (which aired in 1986) was a memorably creepy story with Griffin Dunne carrying around a sinister head in a jar. It also featured the second collaboration between Burton and his new composer of choice, Danny Elfman. While it has occasionally been rerun on TV, the episode is currently unavailable on VHS or DVD. After this, Burton’s feature film career took off and, aside from the odd commercial and web cartoon, he left behind the world of short filmmaking. Burton’s early films vary wildly, both in production quality and storyline. However, they all have some degree of his fantastical vision stamped on them and are an intriguing portrait of a young director’s developing style. We can only hope that eventually they will all see a release in some form or another.